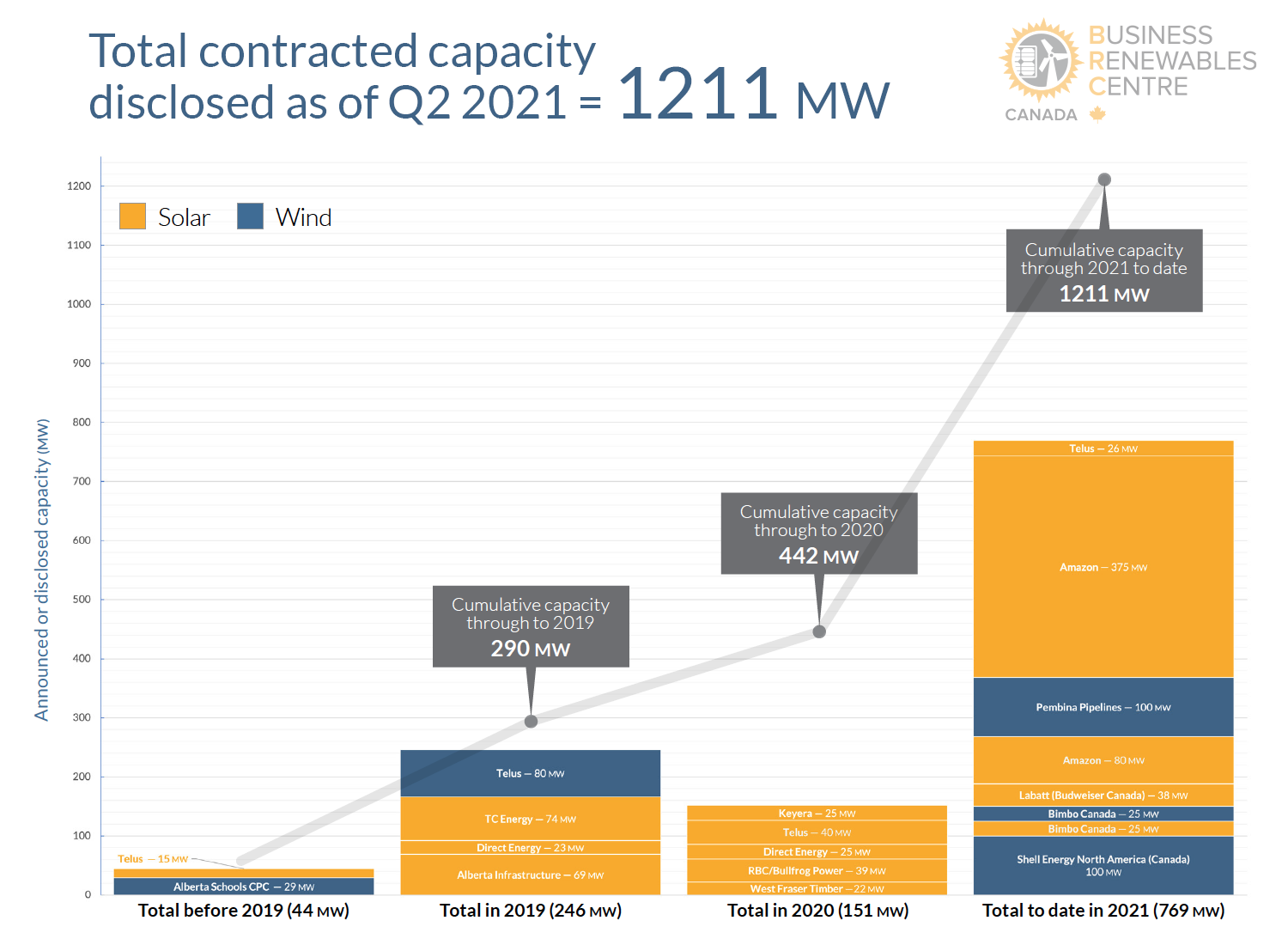 The BRC-Canada Deal Tracker is a one-stop shop to visualize publicly disclosed corporate and institutional deals for Canadian renewable energy projects. Here are the highlights this quarter (July 2021):

➡️   MEMBERS ONLY: Login to the Member Portal and view the detailed Deal Tracker Table

About the BRC-Canada Deal Tracker

The published BRC-Canada Deal Tracker focuses on the buyers behind corporate procurement and the capacity volume of these renewable deals. Where publicly available, BRC-Canada also tracks information about the projects including total project size (where larger than the deal volume), locations, developers, energy volume under the deal, economic development attributes, contract length, type of deal, and expected or actual in-service date. More detail on deals and projects, as well as other information on corporate renewable developments and trends in Canada, are available to BRC-Canada members.

Transactions in the Deal Tracker consist of renewable energy projects where a corporation or institutional buyer has announced or disclosed an agreement to support the growth of renewable energy in Canada by acting as some or all of the project’s offtaker, which can include electricity and/or environmental attributes. Buyers are motivated by voluntary renewable energy commitments or compliance with emissions reduction mandates. A project’s offtakers supply the revenue price certainty and credit necessary to secure capital financing. More information on these deals can be found on BRC-Canada’s website at businessrenewables.ca/public-resources.

For inclusion in the BRC-Canada Deal Tracker, a deal must:

Note: BRC-Canada reserves the right to add to or amend these criteria as new deal innovations arise and new jurisdictions and electricity systems in Canada become hosts to business renewables.

1. Does the Deal Tracker represent all renewable energy under development?

2. I know of a project that isn’t included in here. Why not? How do I get it included?

For inclusion, the deal must meet the criteria listed with the BRC-Canada Deal Tracker. For instance, if the deal is a fixed-price purchase of RECs from a project that pre-existed the deal, it would not meet the criteria around additionality or type of procurement mechanism.

Please contact BRC-Canada with information about any missed eligible deals.

3. Do you have to be a BRC-Canada member to have your project included in the Deal Tracker?

No. The Deal Tracker includes all deals that meet the criteria and have been announced or otherwise disclosed publicly. BRC-Canada is proud to showcase the initiatives of all buyers seeking to secure renewable energy for their needs and how these procurements impact the Canadian market.

4. How many deals involved BRC members?

BRC members were involved in nearly 85% of renewable energy deals — all but three shown in the Deal Tracker (as of 2021 Q2) — either as buyers, developers or intermediaries.

A variety of deals for renewable energy certificates (RECs) or other environmental attributes from renewable energy projects go back over two decades in Canada. These include government procurements, supply for green choice programs for consumers, and offset purchases by major emitters. While these deals are laudable and have fostered the growth of renewable energy — indeed, some were important progenitors for today’s business renewable deals — they do not meet the Deal Tracker criteria, such as the type of procurement mechanism, the nature of the buyer, or the criteria for additionality.

The development of corporate renewables in Canada is a relatively new phenomenon: buyers did not begin actively pursuing these types of deals until Alberta provided public price discovery on wind beginning in late 2017 and solar in early 2019. At that stage, pent-up corporate demand broke open the floodgates in 2019, along with a significant procurement of solar energy for the province’s buildings and operational needs, making it the first year of multiple corporate renewable deals.

Like so much else, the business and financial impacts of the COVID-19 pandemic slowed project and deal development and announcements in 2020. Given the relative nascency of the market and time it takes to complete a deal, it is not surprising that momentum was still building. With both government procurements and private deals backed up from the previous year, 2021 has already proven to be a record year for corporate renewables.

7. Where are the renewable energy projects located?

At this time, all projects backed by corporate renewables deals are in Alberta, where market and regulatory systems already enable corporate procurement.

This will change as other provinces implement the necessary frameworks to host corporate renewables. One such system — the Green Choice Program in Nova Scotia — is already under development and slated to execute the first Canadian deals outside of Alberta in late 2021.

8. What are the benefits for jurisdictions enabling corporate renewable deals?

Public benefits for provinces that host these deals include:

Yes. The primary goal of the Deal Tracker is increased public awareness of the initiatives corporate buyers are taking to procure renewable energy for their own targets and for emissions reduction obligations.

If you have further questions or comments not addressed in the Deal Tracker or FAQs, please contact BRC-Canada by email at info@businessrenewables.ca or through the contact page on our website.