Skip to main content
< Back to Deal Tracker Table

Corporations are driving demand for solar and wind power in Alberta

Renewable energy’s moment has arrived in Canada. And so far, Alberta is reaping most of the benefits.

In April, the Business Renewables Centre Canada launched its inaugural Deal Tracker, Canada’s first public curation capturing corporate procurement of renewable energy. At the time, deals announced in 2021 alone had already surpassed any previous year. Now, as a newly updated Deal Tracker is published at this year’s halfway mark, that record has been smashed again. And every one of the deals to date means shovels in the ground for Alberta. 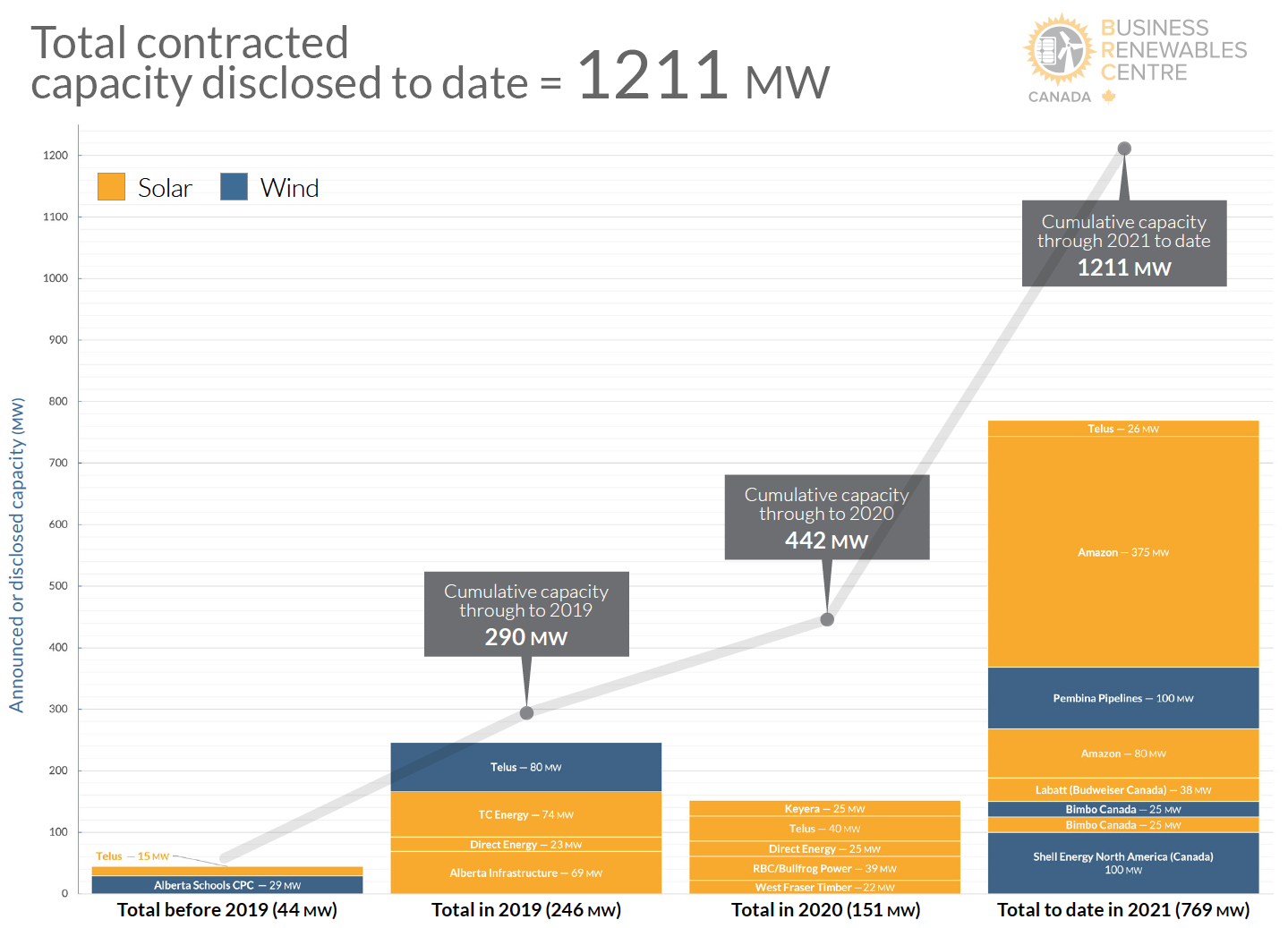 These offtake deals — where a buyer agrees to purchase future goods or services — use what is called a “contract-for-difference,” which ensures a set price for the renewable energy produced by a developer, while offering some protection for buyers against future electricity price uncertainty. This means corporate buyers can secure affordable renewable energy for years to come, and for a range of purposes, from meeting voluntary sustainability commitments (like net-zero targets) to emissions reduction obligations (like industrial carbon pricing).

It’s a win-win that promotes additional development of renewable energy resources, while enabling businesses to take climate action, which is increasingly expected by investors, creditors, customers, policy-makers and society at large.

This uptake in corporate renewables purchasing kicked off after the Alberta government ran several rounds of renewable energy procurements from 2017 to 2019, using the contract-for-difference approach. The resulting — and remarkably low — wind and solar prices broke national records, such that the earliest projects under these contracts have so far made money for the government.

The message has been heard loud and clear in corporate boardrooms: renewable energy is now so cheap that it’s a solid business decision to lock it in now for years to come.

A dramatic rise in corporate procurement

The resulting explosion in corporate deals has been particularly stark for solar energy. At the start of 2020, Alberta was generating 15 MW of utility-scale solar. Since then, a total of 274 MW have newly began operating, with yet another 726 MW currently under construction. The vast majority of this growth — 81 per cent — has been backed by corporate deals. 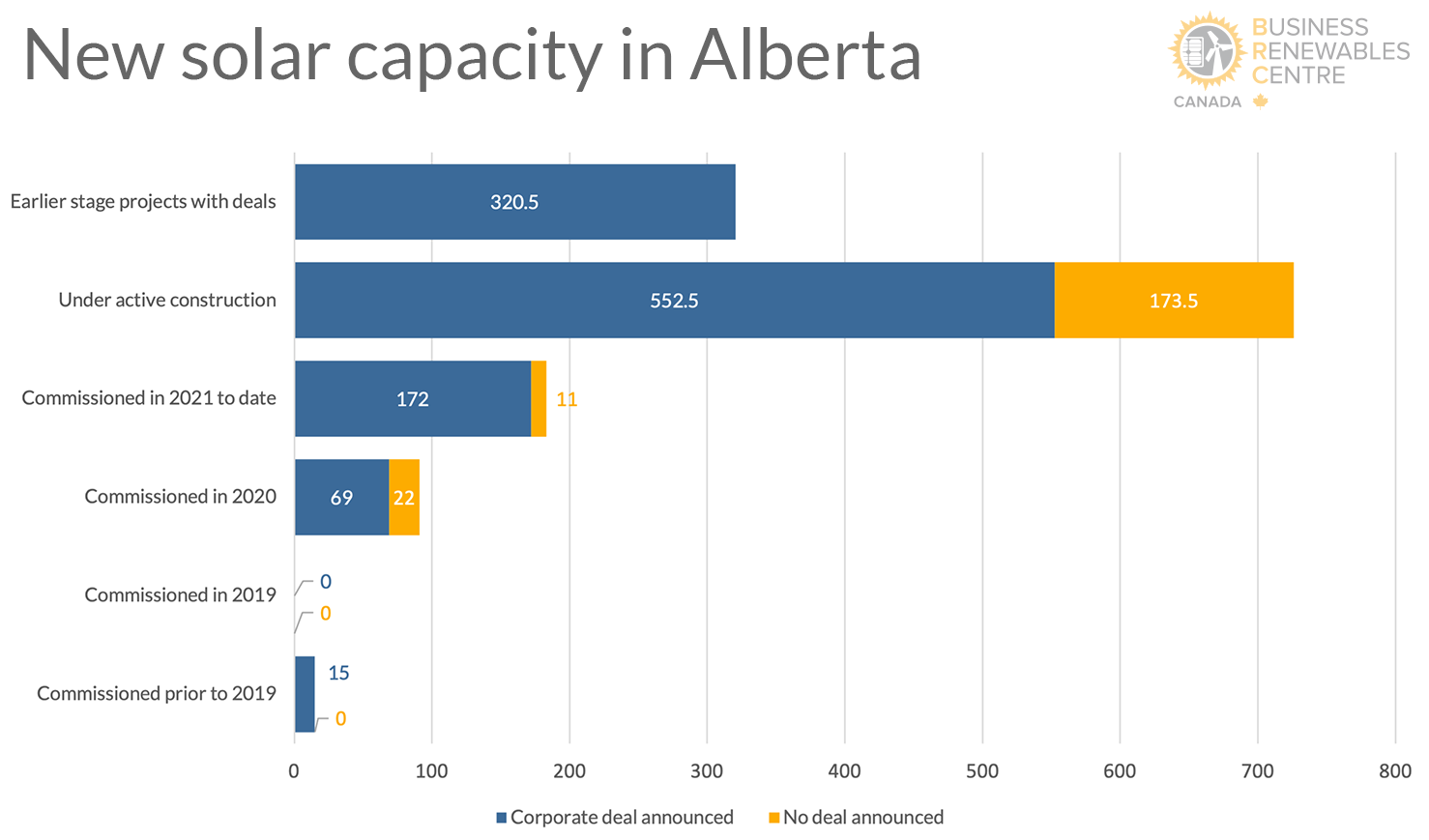 The 19 deals captured by the Deal Tracker represent Canadian corporate buyers from a variety of sectors, including telecommunications, energy, forestry, finance, and food and beverage manufacturers. Most recently, big global technology has jumped into the Canadian mix, with U.S.-based Amazon inking deals totaling more than 450 MW of new Alberta solar power, including the largest single Canadian deal thus far.

With the breadth of interest, the trend is growing quickly. Announcements so far this year have already more than tripled any previous year, and doubled all previous years combined.

In the two months since the Deal Tracker was first published, three new deals have been added totalling more than 500 MW of new wind and solar power. With the 268 MW announced in April, the total for the first half of 2021 now sits at 769 MW. For context, that would power more than 250,000 Alberta homes for a year, or over half of all households in Calgary.

All told, corporate procurement accounts for 1,211 MW of new renewable power development coming to Alberta. That’s enough to power every home in both Edmonton and Red Deer.

Alberta is leading the charge (and reaping the benefits)

For Alberta, the economic benefits of these deals are substantial. Corporate procurement agreements often back wind and solar projects that are even larger than the deals themselves, which altogether are expected to generate $2.5 billion in capital investment in the province and create more than 3,000 construction jobs. These energy development projects also come with millions of dollars in lease payments to rural landowners and property taxes to support municipal budgets. 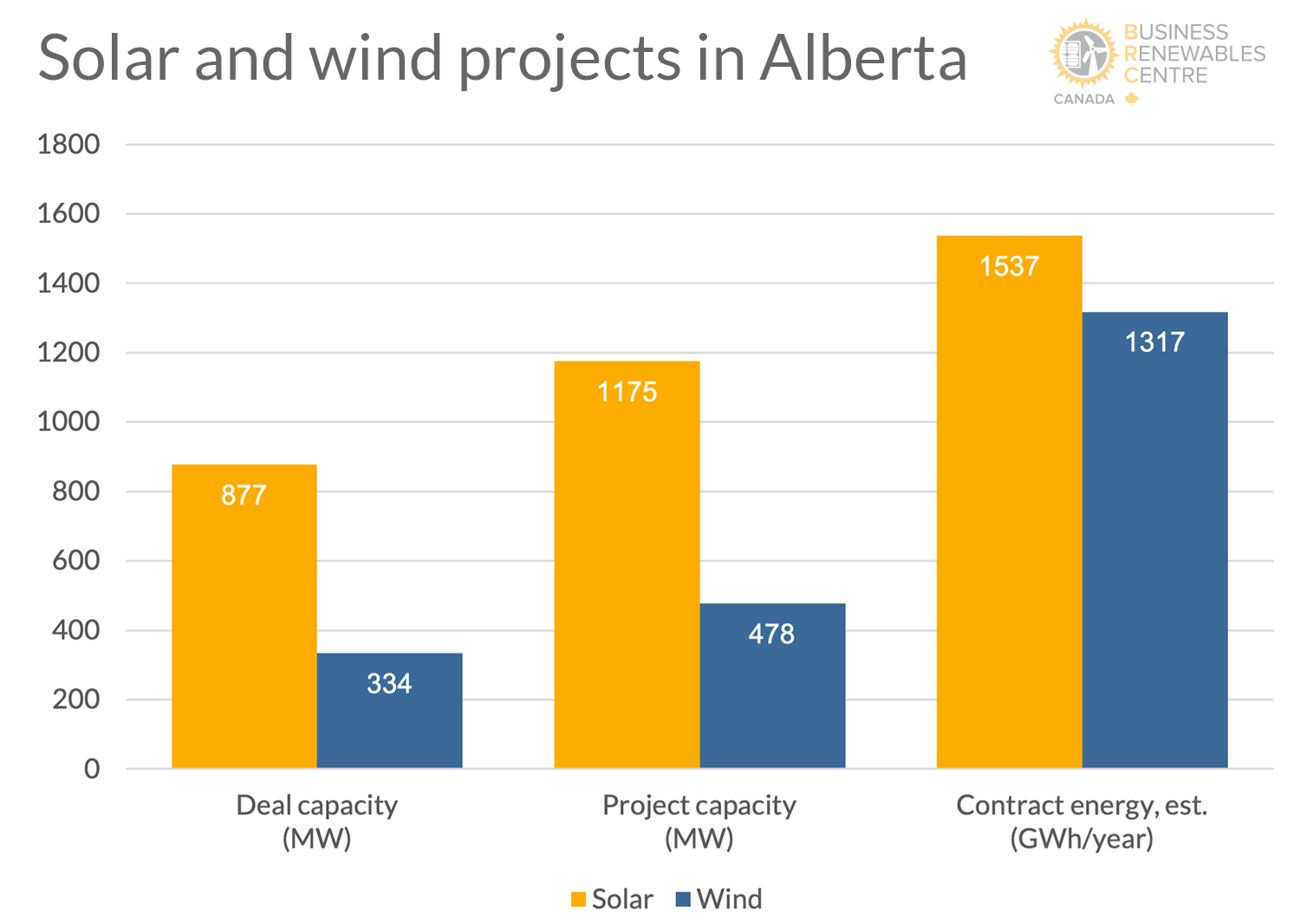 FIGURE 3. Cumulatively, more solar energy deals and projects are in the works than wind (left and centre), however because wind is a more efficient power source than solar, the amount of energy generated annually by each is almost even (right). SOURCE: AESO, LONG-TERM ADEQUACY METRICS (May 2021); BRC-CANADA DEAL TRACKER (July 2021).

So far, Alberta has had a lock on these benefits: its deregulated electricity market is unique in Canada for enabling direct deals between buyers and developers. In other words, it is effectively the only province open to corporate procurement by default.

Other provinces can — and are beginning to — deploy programs or policies to take advantage of the renewable energy opportunities. Nova Scotia is launching its Green Choice Program, which will enable corporate renewables procurement within its regulated electricity system. The Atlantic province expects to connect buyers with several hundred megawatts of new renewable energy within a matter of months. Other electricity systems that currently rely on high-emitting energy sources (like coal and natural gas) — such as Saskatchewan and New Brunswick — are well-placed to develop similar programs that would be attractive to corporate buyers.

The future is bright

While 2020 saw a delay in corporate renewable energy procurement — understandable, given the challenges businesses faced in the wake of a global pandemic, the explosive surge in deals this year shows strong market conditions exist for continued growth.

Companies around the world are looking to renewable energy to help fulfill climate action commitments and reduce their reliance on high-emitting energy sources. They increasingly want to meet electricity needs renewably, and are factoring this into decisions about where to build new facilities. Investors, meanwhile, are looking to back more sustainable business models, while governments are trying to find ways to push towards net-zero emissions. Opportunities on all sides will continue to grow as more organizations adopt these measures and recognize the strong business case for locking in low-cost, low-emitting renewable energy.

The horse has left the barn. And Alberta is showing everyone how to saddle-up and take hold of the opportunities.

Benjamin Thibault is a policy and regulatory expert with over a decade of strategy, advocacy and implementation experience related to climate, electricity, and renewable energy policy. Previously he was the electricity program director with the Pembina Institute, and then served as Alberta's senior policy advisor on electricity and climate change. He currently acts as a consultant and advisor on a variety of renewable energy and clean tech policy and market intelligence initiatives.